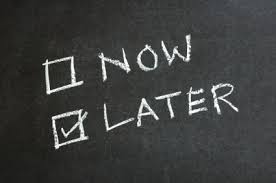 Procrastination gets a bad rap! Whenever most people believe that they are procrastinating, or even hear the word procrastination, it’s like fingers on a blackboard in the mind, a snake in the grass on the path to mental well-being. It has an unsettling effect and a heavy emotional feeling. Not often is procrastination thought of as a desirable trait, and you’ll find very few resumes or CV’s with procrastination as a sub-heading!

Most people feel that they procrastinate at least some of the time. So first thing, if you feel as if you’re procrastinating you’re certainly not alone, so be careful not to beat yourself up for it. Simply (easy to say, right!) relax and accept that it’s happening and it’s not necessarily ‘bad’, it just ‘is’. Once the value judgment has been removed, it’s much easier to create a new paradigm. That new paradigm could be something like “sometimes I postpone activities for no good reason but I know I always complete the things that are important”. By adopting that inner mantra, or something similar that works for you, you’re freeing yourself from your own critical judgment and allowing intuition to create a hierarchy of importance that will align your intentions with your actions. And create new results!

Another idea for consideration is that procrastination is not always without virtue. You can likely recall a time when it felt as if you were procrastinating, and something good happened that would not have otherwise. I recall an instance one time when I had a really complex and important report due to a government agency by a particular date. Several times I dove in and started and restarted parts of it, but always seemed to get distracted. I finally stayed up all night working on it the day before it was due, sometimes frantically, until it was completed. I decided to take a nap before taking it to FedEx, and was awakened soon after by a phone call from my client. My expectation was that he wanted a status report. Instead he related that they had discovered a problem with their data and were elated that I hadn’t sent the report yet. The lesson – it’s important to recognize that what seems like procrastination in the moment may not always be that. It could very well be a subtle message from a higher place.

It’s important to know exactly what procrastination is in order to deal with it. It is a feeling, a sense that where you are is not where you should be. And it’s originating from the inside, it’s not the result of your outside events and circumstances. The feeling is the result of your thoughts, specifically your judgement thoughts, all of which are built on beliefs about your life that very well may not be true. And are, without exception, negative. The truth is that it’s only ‘bad’ if it’s judged by you to be bad. It just ‘is’ and invariably some different thoughts will come along, and the feeling will disappear.

So the question is how to consciously let go the undesirable feelings around procrastination. First, recognize that all your feelings are caused entirely from your thoughts and thinking. Consciously affirm that other thoughts are always available in every moment. And then, for example, you might create a new more desirable feeling by presuming that the thoughts are serving you, even though you don’t know how. By all means, love your procrastinating self!

Acknowledging that procrastination is just something you’re Doing, not something you’re Being, will keep you in the flow of life without wishing and hoping things were different. Let your intuition guide you and you will always get things done on perfect time, Universe time!

Previous Post Procrastination – Vice or Virtue Next Post Inspired Action – What it is and how to take it!